The Feast of the Chair of St. Peter - It's not about furniture

We are celebrating the unity we have together as we are in communion with our Holy Father, the Vicar of Christ. This feast is especially significant this year as the Chair will be vacant in less than a week. 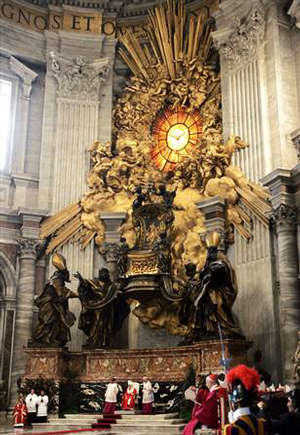 WASHINGTON, DC (Catholic Online) - Several months ago we had the Feast of St. John Lateran, which was a feast that focused on a building. Today's feast, however, the Feast of the Chair of St. Peter, is not merely about a piece of furniture. We are celebrating the unity we have together as we are in communion with our Holy Father, the Vicar of Christ.

This feast also took on new personal meaning for me, as a priest of the Personal Ordinariate, when Pope Benedict named the new U.S Ordinariate for the Chair of St. Peter.  We understood what was being expressed - our unity with the Church is not based on liturgy but rather is found through the chair and the one who sits upon it. The See of Peter embodies the fullness of the faith and, in communion with his successor, we can express our patrimony as Catholics.

Our Ordinary, Msgr. Jeffrey Steenson, emphasized this theme during his installation homily just one year ago.

The first principle of the Ordinariate is then about Christian unity.  St. Basil the Great, the Church's greatest ecumenist, literally expended his life on the work of building bridges between orthodox brethren who shared a common faith, but who had become separated from one another in a Church badly fragmented by heresy and controversy.  He taught that the work of Christian unity requires deliberate and ceaseless effort.  Like an old coat which is always being torn and is difficult to mend, the unity of the Church must never be taken for granted but requires great diligence and courage from her leaders (Bas. Ep.113).

St. Basil often talked with yearning about the "archaia agape," the ancient love of the apostolic community, so rarely seen in the Church of his day.  This love, he taught, is a visible sign that the Holy Spirit is indeed present and active, and it is absolutely essential for the health of the Church.  I can't think of a better illustration for this homily than Bernini's great sculpture of the Chair of St. Peter in the apse of St. Peter's Basilica:  Peter's chair is upheld by the great fathers of the Church; and, hovering over it all, the luminous alabaster dove, the Holy Spirit, bathing everything in the radiance of God's love.

Next week at this time, the chair will be empty. The period of Sede Vacante begins as we await the election of our new pope. As we approach this season of expectation, we are so vividly aware of the importance of this chair and who sits upon it.

You Are Peter
The Gospel passage for today is a familiar one. Here Peter and the others are asked a question and the inspired response from Peter leads to a special pronouncement.

When Jesus went into the region of Caesarea Philippi, he asked his disciples, "Who do people say that the Son of Man is?"

They replied, "Some say John the Baptist, others Elijah, still others Jeremiah or one of the prophets."

Simon Peter said in reply, "You are the Christ, the Son of the living God."

Jesus said to him in reply, "Blessed are you, Simon son of Jonah. For flesh and blood has not revealed this to you, but my heavenly Father. And so I say to you, you are Peter, and upon this rock I will build my Church, and the gates of the netherworld shall not prevail against it.

In the Protestant and Catholic divide, there has been a lot written and spoken about the words, "You are Peter and upon this Rock I will build my Church." To the confessional churches, this cannot be a man but the message only. Yet, God has always built on a person not simply a principle.

In the homily found in Office of Readings for this feast, Pope St. Leo the Great expounds on this declaration. In other words, as my Father has revealed to you my godhead, so I, in my turn, make known to you your pre-eminence. You are Peter: though I am the inviolable rock, the cornerstone that makes both one, the foundation apart from which no one can lay any other, yet you also are a rock, for you are given solidity by my strength, so that which is my very own because of my power is common between us through your participation.

And upon this rock I will build my Church, and the gates of hell shall not prevail against it. On this strong foundation, he says, I will build an everlasting temple. The great height of my Church, which is to penetrate the heavens, shall rise on the firm foundation of this faith.

The gates of hell shall not silence this confession of faith; the chains of death shall not bind it. Its words are the words of life. As they lift up to heaven those who profess them, so they send down to hell those who contradict them.

As St. Leo underscores in his homily, Peter's presence, and that of his successors, stand as a testimony and representative of the Rock of Ages, Jesus Christ Himself. In communion with the Chair of St. Peter puts us in communion with the One who established the man seated as his vicar on earth.

The Chair
The Chair, or "Cathedra" (where we even get our word Cathedral, with that particular church as the seat of the bishop) takes on a special meaning beyond just being a fancy piece of furniture. In fact, the issue of its design and substance is not the focus of the feast.

In 2012, after naming 22 new Cardinals, Pope Emeritus Benedict talked about the Chair in his Sunday homily three days prior to the feast.

The Chair of St Peter, represented in the apse of the Vatican Basilica is a monumental sculpture by Bernini. It is a symbol of the special mission of Peter and his Successors to tend Christ's flock, keeping it united in faith and in charity.

At the beginning of the second century St Ignatius of Antioch attributed a special primacy to the Church which is in Rome, greeting her in his Letter to the Romans as the one which "presides in charity".

It is because the Apostles Peter and Paul, together with many other martyrs, poured out their blood in this City, that this special task of service depends on the Community of Rome and on its Bishop. Let us, thus, return to the witness of blood and of charity. The Chair of Peter is therefore the sign of authority, but of Christ's authority, based on faith and on love.

The Feast of the Chair of St. Peter began around the Fourth Century. While the Cathedra in Rome is of prime importance, the Cathedra he bore in Antioch, prior to going to Rome, also has been remembered on this day.

Today, when one wants to capture the heart of the feast in visible form, the Bernini sculpture, created circa 1647-53, is normally in the spotlight. It bears the following words: "O Pastor Ecclesiae, tu omnes Christi pascis agnos et oves" (O pastor of the Church, you feed all Christ's lambs and sheep).

That's why this Chair will remain a major focus way beyond the day of the feast this year. The pastor of Christ's flock, the Church, is normally "seated" on this cathedra but it will be empty for a short season.

Above the throne - A Dove
In the Bernini piece, there is a stained glass window above the chair with rays of light and the image of a dove at the center, symbolizing the Holy Spirit. The rays are divided into twelve sections, one for each of the apostles.

The Church, throughout the ages, has maintained with confidence the fact that she has been sustained, as the prophet Zechariah declared, "'not by might, nor by power, but by my Spirit,' says the Lord of Hosts." (Zech. 4:6)

Today we are praying that the same Spirit that raised Jesus from the dead will quicken the hearts of our Cardinals as they meet in conclave to discern the next Vicar of Christ, His chief shepherd on earth.

Just 36 years ago a newly ordained bishop, Joseph Ratzinger, spoke of the importance of the Holy Spirit in the Church during his homily. "All of us long for a Pentecostal Church," he shared at his episcopal ordination as archbishop of Munich on the Vigil of Pentecost, May 28, 1977.

He went on to say, "A Church in which the Spirit rules, and not the letter; a Church in which understanding breaks down the fences we erect against each other. We are impatient with a Church that seems so unpentecostal, so unspiritual, so narrow, and so fearful."

While enduring many stereotypical descriptions as the "Pope's Rottweiler," a legalist, etc. our Holy Father has a deep devotion and dependence to the work and power of the Holy Spirit. We know he is praying right now for his successor.

This is an important Feast day for our Church. Blessed John Paul II reflected on its importance and leaves us with a challenge to pray during an Angelus blessing in 2004.

Today, 22 February, is the liturgical Feast of the Chair of St Peter. It sheds light on the special ministry of strengthening and guiding the Church in the unity of the faith which the Lord entrusted to the Head of the Apostles. It consists in this "ministerium petrinum" (Petrine ministry), the particular service that the Bishop of Rome is called to render to the entire Christian people. It is an indispensable mission that is not built on human prerogatives but on Christ himself, the cornerstone of the Ecclesial Community.

Let us pray that the Church in the different cultures, languages and traditions will be unanimous in believing and professing the truths of faith and morals passed down by the Apostles.

Father Randy Sly is the Associate Editor of Catholic Online and a priest with the Personal Ordinariate of the Chair of St. Peter (http://usordinariate.org) established by the Holy Father, Pope Benedict XVI, through the Apostolic Constitution "Anglicanorum Coetibus." He is currently the chaplain of the St. John Fisher Catholic Community, a priest in residence at Our Lady of Hope Catholic Church and Director of Pro-Life Activities for the Ordinariate.