Faith and Reason: Pope Benedict XVI Reminds the World that it is Rational to Believe

Free World Class Education
FREE Catholic Classes
It is rational to believe, as it is our very existence that is at stake

In the irresistible desire for truth, only a harmonious relationship between faith and reason can show the correct path to God and to self-fulfilment 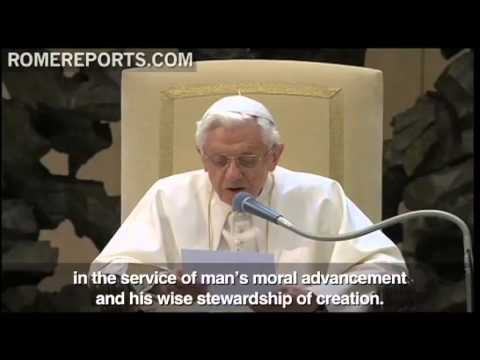 P>VATICAN CITY(Catholic Online) - The way of understanding the world and our role in it, prior to what is called the "modern era" (the post Cartesian age), involved viewing human reasoning in continuity with the reasoning that was already present in the universe.

Reason was not understood as a solely intellectual or cognitive notion. It was most certainly NOT meant to be set in opposition to faith. Rather, when a human being reflected, they participated in Divine Reason.

Indeed the entire universe was quite "reasonable", in as much as it participated in God's reason. The things of creation that are ruled by that Eternal Law were viewed as participating in God's reason. It was in this sense that nature was viewed to somehow embody this "reason", it did not exist in the separated mind of a separated subject

In the thought of St. Thomas Aquinas there was no split between subject and object. Thus, everything and every person participated in God's "reason". Because all things act according to their "nature" (in this integrated sense), they derive their proper acts and ends according to this law of reason.

St Thomas' vision of natural law was teleological, meaning that it explained the end or purpose of all things. It was premised upon the existence of an Eternal Law through which God governs the universe. God is eminently reasonable.

Human beings exercise right reason and authentic freedom to discover what is best suited to achieve the end to and for which we exist, our beatitude, our human flourishing and fulfillment. This natural inclination to our proper end - and our pursuit of it through the exercise of right reason and free will - is what Thomas meant by the Natural Law. Reason leads us to the One who is the source of all that is good and true. Faith and Reason are not at odds.

Blessed John Paul II, in the  introduction to his encyclical letter entitled "Faith and Reason", explained it beautifully: "Faith and reason are like two wings on which the human spirit rises to the contemplation of truth; and God has placed in the human heart a desire to know the truth-in a word, to know himself-so that, by knowing and loving God, men and women may also come to the fullness of truth about themselves." (cf. Ex 33:18; Ps 27:8-9; 63:2-3; Jn 14:8; 1 Jn 3:2).

During his Wednesday catechesis on November 21, 2012, Pope Benedict XVI reaffirmed for the whole world that faith is eminently reasonable and that there is no opposition between reason, properly understood, and faith, properly embraced and lived. Here are some excerpts:

"As the Year of Faith progresses we carry in our hearts the hope of rediscovering our joy at believing and our enthusiasm for communicating the truth of faith to all. This leads us to discover that our encounter with God brings value to, perfects and elevates that which is true, good and beautiful in mankind", said the Pope in his catechesis during today's general audience, held in the Vatican's Paul VI Hall.

Faith, he explained, "means knowing God as Love, thanks to His own love. The love of God opens our eyes and allows us to know all reality beyond the limited horizons of individualism and subjectivism which distort our awareness". Benedict XVI dedicated his catechesis to the rationality of faith in God, emphasising that the Catholic tradition "has always rejected the so-called principle of 'fideism', that is, the will to believe against reason. "

"Indeed, although a mystery, God is not absurd. If, in contemplating the mystery, reason sees only darkness, this is not because the mystery contains no light, rather because it contains too much. Just as when we turn our eyes directly to the sun, we see only shadow - who would say that the sun is not bright? Faith allows us to look at the 'sun' that is God, because it welcomes His revelation in history."

"God has sought mankind and made Himself known, bringing Himself to the limits of human reason".

"At the same time, God, with His grace, illuminates reason and opens up new horizons, immeasurable and infinite. Therefore, faith is a continuous stimulus to seek, never to cease or acquiesce in the inexhaustible search for truth and reality."

"Intellect and faith are not foreign or antagonistic to divine Revelation, they are both prerequisites for understanding its meaning, for receiving its authentic message, for approaching the threshold of the mystery. The Catholic faith is therefore rational and also nurtures trust in human reason."

"Knowledge of faith, furthermore, is not contrary to reason. In the irresistible desire for truth, only a harmonious relationship between faith and reason can show the correct path to God and to self-fulfilment".

"A correct relationship between science and faith is also based on this fruitful interaction between comprehension and belief. Scientific research leads to the knowledge of new truths regarding mankind and the cosmos."

"The true good of mankind, accessible through faith, indicates the direction his path of discovery must follow. Therefore, it is important to encourage, for example, research which serves life and seeks to combat disease."

"Investigations into the secrets of our planet and the universe are also important for this reason, in the knowledge that man is placed at the peak of creation, not not in order exploit it senselessly, but rather to protect it and render it inhabitable."

"In this way, faith does not enter into conflict with science but co-operates with it, offering fundamental criteria to ensure it promotes universal good, and asking only that science desist from those initiatives that, in opposition to God's original plan, may produce effects which turn against man himself."

"Another reason for which it is rational to believe is this: if science is a valuable ally of faith in our understanding of God's plan for the universe, faith also directs scientific progress towards the good and truth of mankind, remaining faithful to that original plan."

"This is why it is vital for man to open himself to faith, and to know God and His plan for salvation through Jesus Christ. The Gospel establishes a new humanism, an authentic 'grammar' of humankind and reality", the Holy Father concluded. "It is rational to believe, as it is our very existence that is at stake".