The vice-president of the Pontifical Institute John Paul II in Rome has proposed a compromise between the university administrators implementing a restructuring plan at the school, and the faculty members who have opposed certain aspects of that plan. 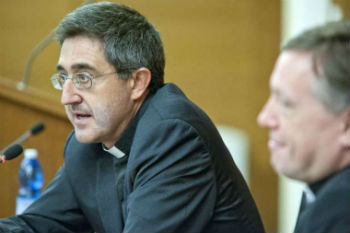 Denver, Colo., Sep 3, 2019 / 11:10 am (CNA) - The vice-president of the Pontifical Institute John Paul II in Rome has proposed a compromise between the university administrators implementing a restructuring plan at the school, and the faculty members who have opposed certain aspects of that plan.

Noting an "impasse" between faculty and administrators regarding changes at the institute, Fr. Jose Granados suggested a "proposal for a constructive solution" in an Aug 27 letter to the school's president, Msgr. Pierangelo Sequiri and its grand chancellor, Archbishop Vincenzo Paglia.

"The elimination of fundamental moral theology and of the integral vision that it allows, not only denies the intention of continuity with the previous inspiration of the Institute, but it also undermines the new plan for the university," Granados wrote, along with two co-signatories: Dr. Stephan Kampowski, and Fr. Juan Jose Perez-Soba

"A solution more in harmony with the nature of Catholic theology would imply - and it is our proposal - that instead of eliminating the chair, a new one is created, so that there are two chairs of general moral theology, whose dialogue expresses the relationship between the old and the new, proper to every true continuity of the doctrine. According to our proposal there would be a chair of fundamental morality, which the institute has already had, and then another chair of 'moral theology of accompaniment,' which could reflect on the pastoral proposal of Amoris Laetitia to be able to lead today's subject to a life according to the Gospel."

"We think that the presence of both chairs would be mutually enriching. On the one hand, reflection on fundamental morality would continue within the Institute, preserving and deepening the teaching of Veritatis splendor, and reestablishing Professor [Livio] Melina in his chair" the letter said.

Melina was dismissed when it was announced in July that the institute's chair of fundamental moral theology was being eliminated in a restructure of the university.

"We could thus continue the search for a morality centered on the encounter with Christ, which reveals to us the radical difference between good and evil, and enables us to walk in the truth of love."

"On the other hand, a new chair of the 'moral theology of accompaniment,' being in dialogue with the chair of fundamental morals, would have all the elements to propose an interpretation of the newness of Amoris laetitia according to the Catholic laws of the development of dogma. The need to take into account the teaching of Veritatis splendor, in fact, would show the possibility of a gradual path of moral growth, which does not forget the radical difference between good and evil (in respect of moral absolutes), and can thus lead men to live God's plan for marriage and the family. Moreover, dialogue with the chair of the sacrament of marriage would help to show how the questions raised by Amoris laetitia do not only concern moral action, but also touch the foundations of the common, visible and incarnate life of the Church."

In July, new statutes were approved for the institute, in response to a 2017 announcement that Pope Francis would legally refound the Institute, and broaden its academic curriculum, from a focus on the theology of marriage and the family to an approach that will also include the study of the family from the perspective of the social sciences.

After the new statutes designed to implement that vision were approved, students, alumni, and faculty raised concerns about the role of faculty members in the institute's new governing structure, about the reduction of theology courses and the elimination of some theology disciplines, and about the dismissal of some faculty members, including Melina and and Fr. Jose Noriega.

Faculty members have told CNA they do not object to the pope's desire to expand the school's mission or approach, but say that the administrators responsible for implementing that mission have acted unfairly.

More than 250 students and alumni of Rome's John Paul II Institute have signed a letter expressing their concern about the school's new statutes, and the dismissal of Noriega and Melina. In several letters, scholars from academic institutions around the globe have also raised concerns about the dismissal of the faculty members and the revision process at the institute.

Granados' Aug. 27 letter emphasized support for Pope Francis' desire to broaden the institute's approach to studying marriage and family. The pope's 2017 motu proprio announcing changes at the institute was "received loyally by the whole community of our institute," the letter said.

The letter said that faculty members of the institute had eagerly worked with Paglia and Sequierra on a plan to implement the pope's vision.

"Our surprise was great, when we saw that, in approving the new statutes, the actual interpretation of the motu proprio was contrary to the one that was continually offered to us."

"Instead, we must note that the motu proprio was used as a legal excuse to make changes within the Institute without respecting discussion among the teaching faculty, normal in an academic institution. In this way it was even possible to deprive two of our ordinary professors of their professorships, which is unheard of in academic circles," the letter said.

The result of the recent controversy, the letter said, is "a shadow of suspicion" on the John Paul II Institute and "the other university centers of the Catholic Church."
Granados and the other professors said they believe that a compromise would help the institute to resume "carrying out its mission with the excellence it has already shown."

The letter did, however, add an additional caveat to the proposed compromise:

"Certainly, the acceptance of this proposal must necessarily be combined with the reestablishment of Professor JosĂ© Noriega's chair," the letter said, regarding a second faculty member whose dismissal was announced in July.

"His service to the institute for over 18 years has been greatly enriching, as recognized by internal and external colleagues...His failure to take up his position in the new institute is a wound to the freedom of the chair, which must be corrected so that the institute recovers its academic dignity."

The letter's authors acknowledge that their proposal "will require the revision of the statutes by the Congregation for Catholic Education. This revision is, among other things, a must, and we ask that it be carried out in an exhaustive manner."

"The statutes, in fact, contain objective difficulties, which concern the joint work of an interdisciplinary institute. The cause of these deficiencies lies partly in the fact that there was no real consultation process, neither with the professors of the central office, nor with the authorities of the international council, as the documents presented for an opinion were other than those with whom we actually worked with the Congregation for Catholic Education," the letter said.