In keeping with its ongoing "Be Your Bold Self" marketing campaign, the University of St. Thomas Houston has commissioned local graffiti artist Mario Figueroa Jr., better known by his artistic name GONZO247, to paint the first permanent mural on campus. The mural, of St. Thomas Aquinas surrounded by Houston landmarks, will be located on the side of Crooker Center, 3909 Graustark, facing the Campus Life Mall. 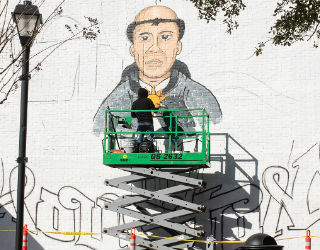 he mural, of St. Thomas Aquinas surrounded by Houston landmarks, will be located on the side of Crooker Center.

Houston (Feb. 8, 2019) -- A native Houstonian, GONZO is renowned throughout the city's art community. His work includes the iconic "Houston Is Inspired" mural located at 315 Travis Street. Recently, he completed one of six installations at the new Saint Arnold's Brewing Co. Beer Garden and Restaurant. Apart from his portfolio, GONZO also has a personal connection to the University: His sister is an alumna and former employee.

Born and raised a Catholic, GONZO used the University's patron, St. Thomas Aquinas, for the focus of the design. Additionally, he often incorporates Houston imagery into his works, which includes the University's mural.

"There were a lot of angles that inspired the design," he said. "One was taking a tour of the campus and seeing objects or designs that jumped out at me. In addition, the history of the campus and of the saint himself, and, of course, the vibrancy and diversity of the city, which I think is reflected in the diversity of the student body here. So, all that meshed together is what is in the design."

The University of St. Thomas was founded in 1947 by the Basilian Fathers as an independent, Catholic, coeducational university in Houston, TX. Situated in the city's Museum District, the University enrolls 3,312 total students with an undergraduate population of 1,602. Set against the backdrop of the Texas Medical Center UST has seen a 75 percent growth rate among students pursuing degrees in STEM (Science, Technology, Engineering, Mathematics) and over half of the undergraduate student body pursues a degree in one of the STEM fields. The University of St. Thomas was ranked 28th in the 2018 edition of the U.S. News and World Report's "America's Best Colleges" list of universities in the western region of the United States and was additionally ranked one of the best colleges in the West according to The Princeton Review.