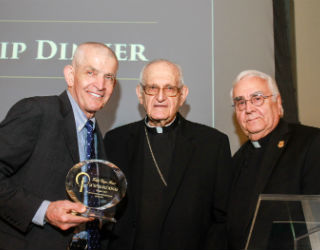 The Faithful Citizen Award was presented to McIngvale, a stand-out community volunteer, philanthropist and owner of Gallery Furniture.

"The Faithful Citizen Award is conferred annually upon persons who, led by the Holy Spirit, manifest the Incarnate Love of God for this world in their lives and actions as Catholics," said President Ludwick. "We thank our friend Mack for embodying the gift of God's loving encounter through his work, service and care for his fellow citizens."

Most recently, McIngvale made national headlines during Hurricane Harvey for transforming his Houston furniture stores into shelters for flood victims and for using his store's moving trucks to rescue Houstonians trapped in their homes. He has since donated thousands of dollars, truckloads of furniture and countless hours of his time to helping Harvey victims rebuild their lives.

Upon accepting the Faithful Citizen Award, McIngvale spoke of his experience during Harvey, "So many people asked me last August why we would let all of those people into our furniture stores, and the answer was simple," he said. "That's the way I was brought up as a Roman Catholic, that's what my beloved parents would have wanted me to do, and that's what I was taught by the Dominicans."

McIngvale expressed deep appreciation for the work of the Nesti Center for Faith and Culture at UST, which strives to bring the Catholic voice to the ongoing conversation about the meaning of life, and the liberty and pursuit of happiness Americans hold in common.

He also shared his insight about the role of religion in America today, saying, "I believe that as a people of faith, it is our duty to spread the faith. Not everyone has the benefits we do, but we can make the world a better place by promoting religion and promoting hard work."

Rev. Donald S. Nesti, CSSp, the Center's founder agrees. "We established the CFC in 1994 as an outreach center to the Houston community in order to develop an integrated approach to the American way of life and the values of the Gospel that responds to the contemporary needs of American Catholics and other faiths."

Nesti added, "Mack is the epitome of a 'faith-full' citizen who is not only a successful businessman but more importantly, he's a servant-leader. He opens his heart to God and others, allowing his faith to be the impetus of his greatness."

More than 250 guests celebrated the charismatic McIngvale while raising more than $176,000 for the Center for Faith & Culture's unique programs and students. Guests included event chairs, Cathy and Joe Cleary, and Cynthia Cisneros of ABC-Ch. 13, who served as Mistress of Ceremonies. Other guests and presenters included Most Reverend Joseph A. Fiorenza, DD, Archbishop Emeritus of the Archdiocese of Galveston-Houston; Charles "Chris" Carmouche, Chair of the Nesti Center for Faith & Culture Advisory Board; and Richard and Melynda Ludwick, President and First Lady of the University of St. Thomas.

"We extend a heartfelt thanks to our sponsors, event chairs, advisory board and honorary committee members for making this special evening possible," said President Ludwick.