Do you love America? What these college professors were caught doing on camera will shock you!

It should be no surprise that America's colleges and universities are overrun with anti-American liberals who lack all respect for the country and the principles upon which it is founded. In an age where political correctness has run amok, students are indoctrinated by their professors and college administrators are terrified of the students, we get what we have today. And what we have today are college administrators literally shredding the Constitution. Literally, page by page. 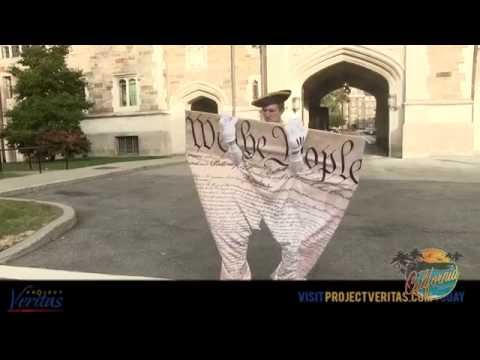 LOS ANGELES, CA (Catholic Online) - Conservative journalist James O'Keefe has struck again and this time, he captured college administrators shredding copies of the Constitution. Filming undercover, a reporter approached administrators at Vassar College in Poughkeepsie, New York and Oberlin College in Oberlin, Ohio. The stunt is part of "Project Veritas," O'Keefe's effort to expose truths.  In this operation, he dressed in a comical Constitution costume, visited college campuses and handed out free copies of pocket constitutions.

Later, in the undercover film, the reporter explained that "They were handing the Constitution out on campus, and I've been kind of hiding out in my room ever since."

The reporter, acting distraught, then asked both administrators if she could destroy the document, "Honestly, can we just like destroy... is there a shredder or something? I think it might be really therapeutic."

Both administrators agreed with one actually shredding the document on camera.

At Oberlin College, professor Wendy Kozol was caught on camera discussing how "the Constitution in everyday life causes people pain."

The reporter said to Kozol, "So, obviously my end goal is I want the Constitution to not have such a central part here at Oberlin-I would like people to see how discriminating it is and how racist it is. Do you think that's a reasonable goal that we could get to?"

"Absolutely," the professor affirms. "I think there are a lot of people who will immediately agree with you and join the conversation and think about ways to limit, confine, or talk back; maybe you just want to talk back to the Constitution."

There is a problem with this story however. O'Keefe is obviously engaged in "gotcha" journalism, and is leading the professors they engage to respond affirmatively to their suggestions, such as coaxing them to shred the copy of the Constitution. These professors are put in a difficult position, which is to be sensitive to an ostensibly distraught student, possibly one who has mental concerns and (perhaps ludicrously) feels so threatened by a pocket copy of the Constitution that she must hide in her room and shred the document.

It is likely that the professors are simply responding to the plight the student faces, even though they make added sympathetic statements and agree to destroy the document.

Ironically, Americans have every right to be offended by, and to shred the Constitution, a right that enshrined in the First Amendment of that document.

However, O'Keefe's stunt reveals something very important and troubling about America's colleges and universities: a number of professors are willing to politically indoctrinate their students. This is a common complaint of students themselves who expect instruction in a curriculum, not a lesson in personal political opinions.

Students should be exposed to a variety of opinions, and there should be no sacred cows in higher education, including things like the American flag, our Constitution and the history of our nation, which is morally very mixed.

Still, it is incredibly disheartening to see that not one professor chose to school the reporter in the importance of the U.S. Constitution. It is a changing, living document that the Founding Fathers carefully crafted to serve the nation and to protect the individual rights of citizens for centuries to come. It is a model still copied around the world. The Constitution has helped safeguard freedom and prosperity for hundreds of millions of Americans. Instead of shredding the document, the better course might have been to talk about the ways the Constitution protects each person. It protects even a young woman on a college campus, who (although acting) hasn't got enough sense to realize that without the Constitution, and the protections it enshrines, her life could be radically worse off.