The fact that authentic Catholic education is rooted in the sacred liturgy of the Church couldn't be more apparent to Sister Mary Josefa, whose path from Thomas Aquinas College in Santa Paula, Calif., to the Benedictines of Mary, Queen of the Apostles, near Kansas City, Mo., was marked by reverent prayer, music and the Sacraments. Sister Josefa heard God's call to the Benedictines while studying at Thomas Aquinas College. But she could never have anticipated that by joining the contemplative Sisters and committing to a monastic lifestyle, she would soon be among America's leading recording artists. 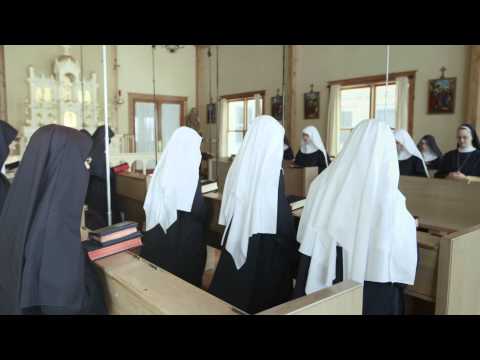 P>KANSAS CITY, MO (Cardinal Newman Society) - The following is the second in a three-part series on the intersection of sacred music and Catholic education, in anticipation of the forthcoming Sacra Liturgia conference in Rome.  Thank you to De Montfort Music, producers of the highly acclaimed album Advent at Ephesus and the new Angels and Saints at Ephesus, for arranging a very rare and special opportunity to interview two of the Benedictine Sisters of Mary, Queen of the Apostles, about their work on the new album and the influence of a Catholic education. The album is available for purchase from the Benedictine Sisters of Mary and proceeds from the sale will go to the order.

*****
The fact that authentic Catholic education is rooted in the sacred liturgy of the Church couldn't be more apparent to Sister Mary Josefa, whose path from Thomas Aquinas College in Santa Paula, Calif., to the Benedictines of Mary, Queen of the Apostles, near Kansas City, Mo., was marked by reverent prayer, music and the Sacraments.

Thomas Aquinas College is recommended in The Newman Guide for its strong Catholic identity, and the liturgical life of its students is as important to them and their tutors as is the top-rated academic program. It's no surprise when graduates are called to the priesthood or religious life.

Sister Josefa heard God's call to the Benedictines while studying at Thomas Aquinas College. But she could never have anticipated that by joining the contemplative Sisters and committing to a monastic lifestyle, she would soon be among America's leading recording artists.

The Sisters' Advent at Ephesus, an album of sacred music released in 2012, topped Billboard's Classical Music Chart for six weeks.  Now Sister Josefa is among the stunningly beautiful voices on the new chart-topping album, Angels and Saints at Ephesus. Tim Drake spoke with Sister Josefa via email and received her responses through her superior, Mother Cecilia.

Congratulations on the new album. Is such beautiful music part of everyday life at the Priory?  What does it mean that contemplative Sisters are topping the music charts?

Yes, thanks be to God, we are blessed with beautiful music every day, principally at the recitation of the Divine Office (some of the Gregorian chant on the CDs are hymns that we sing in the course of the liturgical year during the Office), but also for our daily Mass at which we use both chant and polyphonic pieces. We often bring music to our recreations, especially during festive seasons like Christmas and Easter, and we also enjoy learning special pieces to sing for feast days, especially as a surprise for Mother Prioress.

That contemplative sisters are making CDs that top the music charts indicates a desire in society for contemplative music: music that expresses truth, goodness and beauty, music that brings peace (which St. Augustine aptly terms "the tranquility of order," so absent from the hectic pace of modern lifestyles), music that ultimately draws the listener to the source of all these, to God Himself.

Were you drawn to sacred music in high school or even earlier?  How did music impact your formation as a young Catholic?

I was drawn to sacred music when I was still quite young; I remember that my favorite tapes as a 7 year-old were recordings of the Trapp Family Singers, whose repertoire includes sacred as well as folk and classical music. From that age through high school, I studied classical piano and often learned hymns and other sacred music for keyboard. As a student at Thomas Aquinas College, I sang in the College Choir and there was able to sing the a capella, polyphonic music that I had enjoyed as a child.

This exposure to sacred music throughout my education helped to form my faith by teaching me love and reverence for sacred things through the beauty of music.

Why did you choose to attend Thomas Aquinas College?

I chose to attend Thomas Aquinas College because it integrated classical and Catholic education; I was fascinated by the liberal arts program, with its consideration and discussion of original sources, introducing the student to the perennial questions with which mankind has always grappled, but I was further drawn by the Catholic identity of the school, which orders this program of studies in order to lead the student from the contemplation of created truth to the contemplation of God Himself.

What was your experience of the liturgy and sacred music while at the College?  Did it help in the discernment of your vocation?

At Thomas Aquinas College, I was introduced to the Latin Ordinary Form of the Mass, often accompanied by the Gregorian Schola or the a capella polyphonic choir. The use of the liturgical language made a great impression on me; I found that I preferred to pray in the language of the Church. Both at TAC and later at the ITI, I often would join groups of other students to chant the Divine Office in Latin, particularly the Office of Tenebrae during Holy Week. This love for chanting the Office in Latin eventually became one of the principal factors in discerning my religious vocation. I realized that if I decided to become a religious, especially a contemplative religious, then this would be the way that I would want to pray. Through Latin and the ancient chants, I was able to enter into the mind and heart of the Church and pray with her voice.

Is reverent liturgy important to a Catholic education?  How does it relate to the academic life of a high school or college?

Reverent liturgy is indispensable to a Catholic education.The purpose of Catholic education is to lead the human person to know and love the highest things - truth, goodness, and beauty - and to know and love their ultimate source, God Himself. The liturgy places the person in direct contact with God and so must be faithful in expressing as much of His truth, goodness, and beauty as possible.

Reverent liturgy relates to a school's academic life because it forms the students' faith in invisible realities and teaches them the loving contemplation of the truths that they are studying.

Many Catholic colleges have become increasingly secular. How did Catholic identity at Thomas Aquinas College help to strengthen your faith, and play a role in your vocation?

At TAC, I was blessed to be part of a community that was really unified and ordered by its Catholic identity. I attended daily Mass and Rosary with my teachers and fellow students; the chapel was the central point of the campus and teachers and students always would stop on the way to or from class for a visit; everyone acknowledged senior theology as the culminating point of the curriculum to which all the other classes were ordered; in these and countless other ways, I experienced a community that recognized that the invisible realities are more real, more important than the visible ones. Naturally, this greatly nourished the inclination that I had had to religious life since I was young. Many of my fellow students were also drawn to religious life as a result of the strong Catholic community and contemplative program of studies, and having peers considering a vocation really strengthened my own.

We remind readers that The Cardinal Newman Society has partnered with De Montfort Music to host a student writing contest. We'll be awarding five free CDS of Angels and Saints at Ephesus for the best essays from Newman Guide college students on how sacred music and the liturgy have been been integral to their Catholic education. The complete contest details are located here.

The Cardinal Newman Society is dedicated to renewing and strengthening Catholic identity at America's 224 Catholic colleges and universities.This article is used with permission.