Even as Catholics celebrate this week's announcement that The Catholic University of America will return to single-sex dorms, a new report identifies a thriving "hook-up" culture on Catholic college campuses and warns of the emotional and physical costs of casual sex among students. 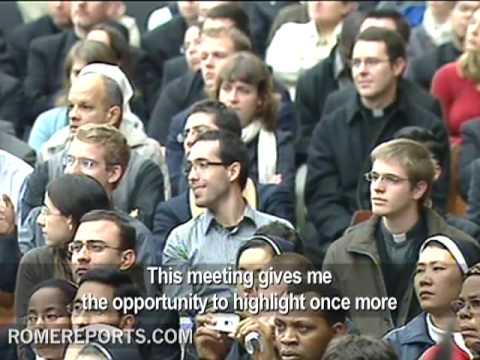 P>MANASSAS, Va. (Cardinal Newman Society) - Even as Catholics celebrate this week's announcement that The Catholic University of America will return to single-sex dorms, a new report identifies a thriving "hook-up" culture on Catholic college campuses and warns of the emotional and physical costs of casual sex among students.

The report, published by The Cardinal Newman Society (CNS) Center for the Advancement of Catholic Higher Education, reviews the social science literature that has been published over the last twenty years on student behavior and college policies, including the impact of single-sex residences.

"Hooking up" is defined by researchers as casual, noncommittal sexual activity ranging from kissing to intercourse.

"Whatever the origins, the reality is that hooking up has become the dominant script for sexual and romantic relationships on Catholic and secular campuses," write the study's authors, Dr. Anne Hendershott and Nicholas Dunn.  Hendershott is the Pope John Paul II Fellow in Student Development for the CNS Center and an accomplished sociologist, whose works include Status Envy: The Politics of Catholic Higher Education, The Politics of Abortion and The Reluctant Caregivers.

The report, titled "The 'Hook-Up' Culture on Catholic Campuses," is available at the website of The Center for the Advancement of Catholic Higher Education here.

The authors note studies showing that heavy use of alcohol correlates strongly with promiscuity on college campuses, and both are tied to co-ed living arrangements.  They cite data indicating that students in co-ed dorms are roughly twice a likely to drink heavily and engage in binge drinking, and also to have multiple sexual partners.  These problems are confronted by student affairs administrators and residence hall staff, who often are expected to be non-judgmental and are not well-trained how to operate in a Catholic living environment.

The report is a product of The Cardinal Newman Society's Love and Responsibility Program, which helps Catholic colleges and universities develop a campus culture where students embrace an assumption of sobriety and chastity.  CNS is working with experts in the fields of psychology, sociology, theology, student affairs and campus ministry to identify programs and policies that can be tested and replicated on both Catholic and secular campuses.

"For Catholic colleges that are faithful to Catholic teaching and share concern for the moral development of students, the 'hook-up' culture is a scandal and an embarrassment," said Patrick J. Reilly, President of The Cardinal Newman Society.  "But both the problems and the solutions do not depend on religion, they are apparent in the social science data.  The way forward is becoming clear, and now college leaders need the will to confront a damaging campus culture."

Divided into four sections, "The 'Hook-Up' Culture on Catholic Campuses" defines the hook-up culture and identifies the extent of the problem of casual sexual behavior on campus; considers the psychological, spiritual and physical damages associated with such behavior; examines the role of alcohol in encouraging and expanding the hook-up culture; and investigates the impact of campus policies and student affairs personnel.

The report concludes with a sign of hope: the "counter-culture" emerging on many Catholic and secular campuses, with students taking the lead in promoting a culture of chastity and traditional values.

The Catholic institutions included in The Newman Guide to Choosing a Catholic College already strive to promote and cultivate Christian behavior among their students.  For more information about these institutions, The Newman Guide is available online as a free online resource at www.TheNewmanGuide.com.

The Cardinal Newman Society is dedicated to renewing and strengthening Catholic identity at America's 224 Catholic colleges and universities.This article is used with permission.