If ever there was a year that needs Advent, 2020 is that year. 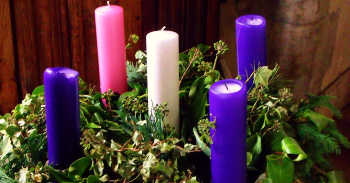 We have seen tragic deaths from the China virus (though thankfully, far fewer than there would have been without the historic leadership of President Trump); unhinged violence in our streets that lasted not for months because of the failure of Democrat leaders, and a tumultuous election which, while fending off a lot of Democrats, also saw a lot of fraud which is currently being exposed in affidavits, legislative hearings and courts..

Christ's coming ushers in the final triumph of life over death. For us, the faithful, the preparation for that coming includes repentance from the works of death, including abortion. Not only individuals but nations likewise need to repent. This repentance includes living with active respect for every human life, and building a society of justice and welcome for the most vulnerable.

We are a long way from realizing that society of justice, but there has been good news on the pro-life front even in these last few weeks. A law protecting babies from the brutality of dismemberment abortion has been enacted in Nebraska and a federal court has ruled that a law in Tennessee that protects babies from abortion based on gender, race and disability can be enacted.

Voters in Louisiana established that their state constitution does not include a "right to abortion."The federal Centers for Disease Control just released numbers showing that the number of children killed by abortion each year continues to fall.

And yet the forces of darkness are arrayed against those of us who strive to live in the light. If the presidential election is ultimately called for Joe Biden, building a society of justice will require steadfast opposition to his destructive policies.

But as Advent teaches us, we should never lose hope.

Throughout history the human heart has been torn between hope and fear. We fear the menace of death, destruction, and meaninglessness. Yet we yearn in hope for One who can save, protect, and fulfill us. And how does that One, foretold by the Prophets and by the mighty acts of God's intervention to save his people of old, finally come to us? He comes as an unborn child.

The Almighty Son of God did not appear on earth as a king on the clouds or an adult teaching his message. He first appeared by being hidden in the womb of his mother. He first appeared so small that the naked eye could not see him. He came through a pregnancy and lived as a child in the womb.

So as we prepare to welcome Christ, let us recommit ourselves -- no matter the forces arrayed against us -- to welcoming and protecting every unborn child.