What is Pope Francis doing for Christmas?

The Vatican has released news of this year's Christmas tree, Nativity scene and Pope Francis' plans to celebrate the reason for the season. 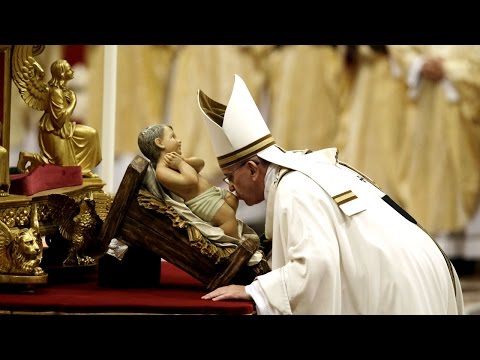 There is also be a replica of a traditional "Luzzu" Maltese boat to represent life, tradition, fish and migrants forced to flee their homes by sea.

The Vatican's 82-foot-tall Christmas tree was felled in the Trentino province in northern Italy and arrived at the Vatican on Thursday, November 24.

Local students planted nearly forty new spruce and larch seedlings near the site in an area safe from trees that were culled after they were discovered to have parasites.

The Christmas tree will be decorated with drawings created by ill children across Italy and, shortly before the tree-lighting ceremony begins, some of those children will have an opportunity to meet Pope Francis.

Grech will join the children and representatives from Trent and Malta to meet the pontiff as well.

As for the rest of the Christmas and New Year celebrations, the Vatican released Pope Francis' liturgy schedule:

December 12: Pope Francis will celebrate evening Mass on the feast of Our Lady of Guadalupe. The Mass will include ancient liturgical hymns composed in indigenous languages, including Nahuatl, Quechua, Mapuche and Guarani. The Sistine Chapel Choir will be joined by the Latin American Choir under the direction of conductor Eduardo Notrica.

December 24: The pope will celebrate Christmas Mass at 9:30 p.m. in St. Peter's Basilica.

December 25: Pope Francis will give his Christmas blessing "urbi et orbi" (to the city and the world) at noon from the central balcony overlooking St. Peter's Square.

December 31: In St. Peter's Basilica, the pope will preside over evening prayer and the singing of the "te Deum" in thanksgiving for the year that is ending.

January 1: The pope will celebrate a Morning Mass in St. Peter's Basilica for the World Day of Prayer for Peace and the feast of Mary, Mother of God.

January 6: On the feast of the Epiphany, Pope Francis will celebrate Mass in St. Peter's Basilica.

January 8: On the feast of the Baptism of the Lord, the pope will celebrate Mass in the Sistine Chapel and baptize several babies.

January 25: Pope Francis will  preside over an ecumenical evening prayer service for the feast of the Conversion of St. Paul. The service concludes the annual Week of Prayer for Christian Unity.