'Living Lent': Saturday of the Fifth Week of Lent - Day 39 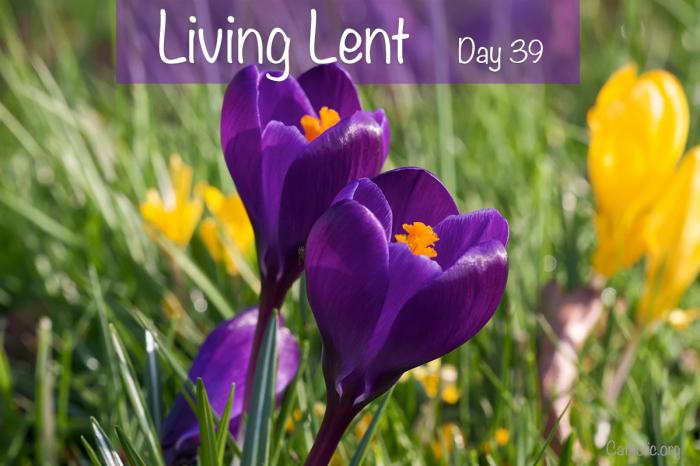 'Living Lent': Saturday of the Fifth Week of Lent - Day 39

45 Many of the Jews who had come to visit Mary, and had seen what he did, believed in him,

46 but some of them went to the Pharisees to tell them what Jesus had done.

47 Then the chief priests and Pharisees called a meeting. 'Here is this man working all these signs,' they said, 'and what action are we taking?

48 If we let him go on in this way everybody will believe in him, and the Romans will come and suppress the Holy Place and our nation.'

49 One of them, Caiaphas, the high priest that year, said, 'You do not seem to have grasped the situation at all;

50 you fail to see that it is to your advantage that one man should die for the people, rather than that the whole nation should perish.'

51 He did not speak in his own person, but as high priest of that year he was prophesying that Jesus was to die for the nation-

52 and not for the nation only, but also to gather together into one the scattered children of God.

53 From that day onwards they were determined to kill him.

54 So Jesus no longer went about openly among the Jews, but left the district for a town called Ephraim, in the country bordering on the desert, and stayed there with his disciples.

55 The Jewish Passover was drawing near, and many of the country people who had gone up to Jerusalem before the Passover to purify themselves

56 were looking out for Jesus, saying to one another as they stood about in the Temple, 'What do you think? Will he come to the festival or not?'

MEDITATION:
Jesus faced danger when he preached. The more prominent he became, the greater the danger. Eventually, some of the more powerful people in Jerusalem decided to kill him.

Despite this danger, Jesus continued his ministry. He was not foolish, and he knew eventually he would face arrest. But he found prudent ways to continue his ministry until the time of the Passover feast.

Like Jesus, we may sense danger. Our danger may not be deadly, but we may sense the danger of embarrassment, harassment, or persecution when we live the Gospel and show love towards others. Many people who serve the poor and disenfranchised report troubles.

But like Jesus, we are called to show courage in the face of danger. Let us be courageous and act with faith. God protects those who do his will, we have nothing to fear.

LET US PRAY:
Lord, make my heart stout and strong as I seek to do your will. Even though I experience fear, give me the courage I need to finish your work.

ACTION:
I will not allow fear to keep me from doing God's work. I will seek a safe, reasonable way to do a kindness, even if doing the deed is outside of my comfort zone.