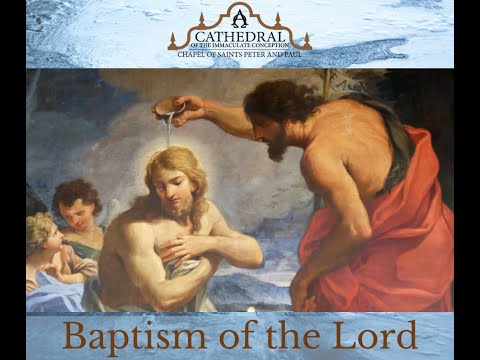 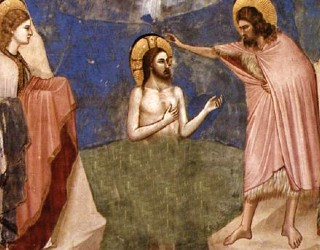 I AM HAPPY TO OFFER EACH OF YOU AN INVITATION TO SUNDAY MASS on January 9, 2022, in the Catholic Diocese of Tyler, Texas.

We end the Christmas season this Sunday with the Feast of the Lord's Baptism in the Jordan. Some of the most beautiful readings in the Office of Readings are found in the Liturgy of the Hours, the official prayer of the whole church between the Feast of the Epiphany and the Baptism of the Lord.

The Liturgy of the Hours, also called the Breviary, is the required prayer of all Clergy, Bishops, Priests, and deacons, as well as those in the consecrated life. However, since the last Church Council, this official Prayer of the Church is recommended for all Christians - and understandably so. Once one discovers the Office of Readings it becomes the first place, after the Sacred Scripture, to go for inspiration and food for life's journey!

These readings touch upon the deeper meaning of both the Epiphany, which we celebrated last Sunday, and the Baptism of the Lord Jesus in the Jordan. Here are a few sentences from an ancient homily given by the Bishop of Constantinople, St. Proclus:

"At Christmas we saw a weak baby, giving proof of our weakness. In today's feast, we see a perfect man, hinting at the perfect Son who proceeds from the all-perfect Father. At Christmas the King puts on the royal robe of his body; at Epiphany the very source enfolds, and, as it were, clothes the river. Come then and see new and astounding miracles: the Sun of righteousness washing in the Jordan, fire immersed in water, God sanctified by the ministry of man."

The Feast of the Baptism of the Lord marks the beginning of what is called the "public" ministry of Jesus. He was thirty years old. He died His redemptive death at Golgotha when He was only thirty-three. However, He also spent thirty redemptive years of life in what writers have sometimes called His "hidden years" in Nazareth's school, "growing in wisdom and stature". (Luke 2:52)

Those years were not hidden in the sense of unimportant. It simply means that we do not find much about them in the Gospel accounts. However, they are rich with meaning, revealing the deeper truths of our faith and its invitation to each one of us who bear the name Christian to live our lives now in a new way by living them in Him.

Jesus, Perfect God and Perfect Man, the Incarnate Word, Son of God, and Son of Mary, gave the same glory to the Father when he was working with wood in the workshop of Nazareth as he would years later when he raised a friend named Lazarus from the dead. From the moment of His conception, the Son of God recapitulated (a favored word of the great Church father, Bishop Irenaeus of Lyons) the entire human experience, re-creating and beginning humanity anew.

During those years, in the hearth of a human family the Son of God sanctified and transformed every aspect of ordinary human life. His redemptive and transforming work began in the first home of the whole human race, His mother's womb. Jesus was a Redeemer in the Womb, beginning His Incarnation as an Embryonic Person, to use the phrase from the Instruction from the Holy See entitled "On the Dignity of every Human Person". From within the Living tabernacle of the Womb of the All Holy Virgin, He began His redemptive mission.

This child of Mary's was born, and heaven touched earth. We commemorated that Holy Nativity just days ago. At the breast of his mother, He elevated the already holy wonder and dignity of the vocation of motherhood. In His sacred humanity he was nurtured, a sign of the beauty of the human experience of love, growth, and maturation. He was raised by a human mother and father; and parenting and family life forever took on a deeper meaning in the domestic church of the family. At the bench of Joseph, the carpenter; he learned the carpenter's trade and sanctified all human work as a participation in the continuing work of both creation and redemption.

The word Epiphany means a manifestation, a making present, a revealing. There is no doubt that even during those so called "hidden" years the plan, purpose and redemptive implications of the entire saving life, death, and resurrection of Jesus were being manifested and revealed. They reveal how the ordinary becomes extraordinary when lived in communion with God the Father.

The Baptism of the Lord is also called the Theophany, in the Eastern Christian churches, Catholic and orthodox. It is the manifestation of God Himself. Our Gospel at the Liturgy recounts the wondrous revealing of the Holy Trinity. As the Incarnate Word of the Father was immersed in the Waters, the voice of the Father is heard, and the Spirit descends. (Luke 3)

The Theophany has inspired extraordinary reflection in the Tradition. Here is another excerpt from an early homily: "Therefore the Lord Jesus came to baptism and willed to have his body washed with water. Perhaps someone will say: "He who is holy, why did he wish to be baptized?" Pay attention therefore! Christ is baptized, not that he may be sanctified in the waters, but that he himself may sanctify the waters, and by his own purification may purify those streams which he touches".

"For the consecration of Christ is the greater consecration of another element. For when the Savior is washed, then already for our baptism all water is cleansed and the fount purified, that the grace of the laver may be administered to the peoples that come after. Christ therefore takes the lead in baptism, so that Christian peoples may follow after him with confidence." (St. Maximus of Turin, 423 AD)

Last week we reflected on the wise men from the East who followed the light to the fullness of Divinity who humbled Himself to share in our humanity. This Sunday, the church points to this Manifestation in the river of Jordan, this Epiphany in the waters, as the event wherein the full plan of God for His Church and the entire creation was manifested or revealed. We are called to become a manifestation, an Epiphany of God in a world stumbling along in the darkness of sin. That is what we celebrate today.

The Baptism of Jesus manifests the very life of the Holy Trinity to the whole world and opens the door, through Jesus Christ, into a communion, a participation in the life of the Trinity through Baptism into His Body, the Church. The waters of the Jordan are sanctified by the Son and now all water is sanctified. Just as the Spirit hovered over the waters of the original creation, the Spirit hovers over the waters where the Son is immersed by John. This is the reason why in the Orthodox and Eastern Catholic Churches, the clergy often lead the faithful to rivers and entire rivers are blessed!

One of the first elements of creation - created by the Father through the Word - is now re-created through the Incarnate Word. The Word Incarnate, Jesus, the Son of the Father, stands in the waters of the earth which was created through Him. Into these waters, through which the people of Israel were once delivered, the entire human race is now invited to follow Jesus. What was once the means of God's judgment and purification at the time of Noah, fills the Baptismal fount where men and women are delivered from sin and made new!

The Church is given new waters for her saving and sanctifying mission. The Trinity, the Communion of Divine persons in perfect unity, is revealed. In the great liturgical prayer of the Eastern Liturgy, the Church proclaims: "When Thou, O Lord was baptized in the Jordan, the worship of the Trinity was made manifest... O Christ our God who has appeared and enlightened the world, Glory to Thee." In his baptism in the Jordan, Jesus is not sanctified for He is without sin, we are capacitated now in Him to become "sons (and daughters) in the Son".

The Theophany also reminds us that all of creation will be redeemed! As Paul wrote to the Christians at Rome, creation itself groans for that full redemption (Romans 8:28). This belief in the full redemption of creation, of a new heaven and a new earth, is integral to the Christian faith. Christians are NOT anti-matter. We profess in our ancient creed that we will await the resurrection of our bodies and life in a world to come.

The Feast of the Theophany, the Baptism of Jesus in the Jordan, celebrates the full salvation and sanctification of all matter as well. The Greek word for Baptism means to be immersed. Before it is all over, the entire world will be immersed in God and transformed. It will be freed from sin and made new! That is why in the Eastern Christian churches, Orthodox and Catholic, priests in areas close to bodies of water lead a procession to them and bless them. All waters have become holy now because the Son has been immersed in them. They are used for the new birth of Baptism.

Descending into the waters of the Jordan, Jesus, who shares our humanity, makes that living water flow with healing mercy. His Divine Life is now mediated through the Sacraments in the life of the Church which is His Body. The Word descends and begins the re-creation of the universe. This is an ongoing work which will only be complete when He returns. We who are baptized into Him are called to participate in this ongoing redemptive mission. The public mission and ministry of Jesus began at the waters of Jordan. However, it continues through His Church, of which we are made members through Baptism.

We are invited on this Feast to live our lives in the Theophany of the God who is a Trinitarian communion of Perfect love. The Christian vocation, no matter what our state in life, is to reveal the Love of the Trinity to the entire human race to bring them to the Waters of Baptism into New Life in the new humanity of the Church which is Christ's Body. There, joined in Him we participate in His ongoing redemptive mission until He returns to make all things new.

Have a Blessed Lords Day,