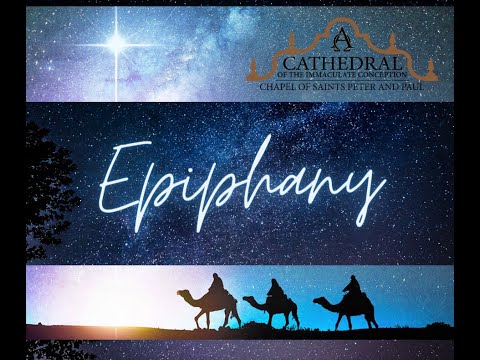 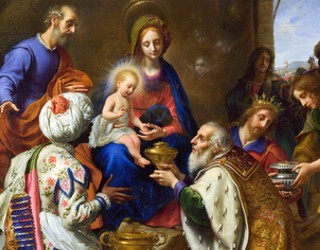 January 2,2022 -- Sunday Solemnity of the Epiphany of the Lord

I AM HAPPY TO OFFER EACH OF YOU AN INVITATION TO SUNDAY MASS ON THE SOLEMNITY OF THE EPIPHANY OF THE LORD in the Catholic Diocese of Tyler, Texas.

This Sunday we celebrate the Epiphany of the Lord.

Our first reading, from the great Hebrew Prophet Isaiah, and our responsorial Psalm, speak of the Light which will come to Israel and draw all the Nations to the Lord. The Kings who will come to offer gifts and do Him homage. And, from the first century, the Church has affirmed that these prophetic words were fulfilled in the Nativity, the Birth of the Lord Jesus Christ.

God had a universal plan of salvation from the beginning. He chose Israel in order to reveal Himself, through them, to all the Nations. The word Epiphany means manifestation. It comes from Greek roots which mean "to show", or to display. Our God wants to reveal Himself, to communicate His Salvation to all the world.

The second reading is an excerpt from the Apostle Paul's letter to the Ephesians. It is from the third chapter of that letter. St Paul writes of his ministry to the gentiles. A little later in the chapter he writes of the "mystery hidden for ages...that through the Church, the manifold wisdom of God may be made known."  The Lord has always intended to reveal Himself to every Nation. To make known the plan of salvation.

And, it has been made known, in and through Jesus Christ, the Light of the world. The One who is the "image of the invisible God" as the Apostle Paul writes to the Colossians, is fully revealed in and through Jesus Christ. The God we proclaim wants to be known, loved, and revealed. He is not hidden, but made manifest, to those who have the eyes of living faith to see Him.

The Gospel for this Feast of the Epiphany tells the wonderful story of the Magi, the three kings, who following a star, are led to a cave where the Light of the world is revealed. The Catechism of the Catholic Church explains this Feast beautifully in these words:

"The Epiphany is the manifestation of Jesus as Messiah of Israel, Son of God and Savior of the world. the great feast of Epiphany celebrates the adoration of Jesus by the wise men (magi) from the East, together with his baptism in the Jordan and the wedding feast at Cana in Galilee.

"In the magi, representatives of the neighboring pagan religions, the Gospel sees the first-fruits of the nations, who welcome the good news of salvation through the Incarnation.

"The magi's coming to Jerusalem in order to pay homage to the king of the Jews shows that they seek in Israel, in the messianic light of the star of David, the one who will be king of the nations.

"Their coming means that pagans can discover Jesus and worship him as Son of God and Savior of the world only by turning towards the Jews and receiving from them the messianic promise as contained in the Old Testament.

"The Epiphany shows that "the full number of the nations" now takes its "place in the family of the patriarchs" and acquires Israelitica dignitas (is made "worthy of the heritage of Israel") [CCC 528].

Pope Emeritus Benedict XVI, when he held the Chair of Peter, gave reflections on the Feast if the Epiphany to help the faithful enter more deeply into its meaning. I share with you today an excerpt from his 2007 teaching for your reflection:

"We have seen his star in the East and have come to adore the Lord" (Gospel acclamation, cf. Mt 2:2).

"What amazes us each time when we listen to these words of the Magi is that they prostrated themselves before a simple baby in his mother's arms, not in the setting of a royal palace but, on the contrary, in the poverty of a stable in Bethlehem (cf. Mt 2:11).

"How was this possible? What convinced the Magi that the Child was "the King of the Jews" and the King of the peoples? There is no doubt that they were persuaded by the sign of the star that they had seen "in its rising" and which had come to rest precisely over the place where the Child was found (cf. Mt 2:9). But even the star would not have sufficed had the Magi not been people inwardly open to the truth."

On this Sunday when we reflect on the Epiphany, the Manifestation, of the Lord to all the Nations, let us choose to be a people who are always "open to the truth", always looking for the manifestation of the Lord and leading others to Jesus Christ who is the Way, the Truth and the Life.