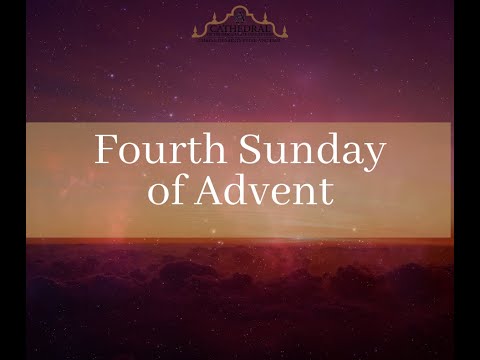 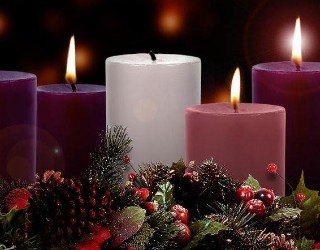 I AM HAPPY TO OFFER EACH OF YOU AN INVITATION TO SUNDAY MASS ON THE FOURTH SUNDAY OF ADVENT in the Catholic Diocese of Tyler. The response to offering these beautiful liturgies has been overwhelming. The readings, as always, offer so much for us to reflect on. It is helpful to pray through them and reflect upon them before we assist at Holy Mass.

Our first reading on this Fourth Sunday of Advent was taken from the prophet Micah. The Spirit of God, speaking through the Prophet, prophesies that from Bethlehem shall come the "ruler of Israel". Bethlehem was the hometown, the city of David, Israel's greatest king. Though it was small, it became the birthplace of Jesus, the Messiah.

In chapter two of Matthews gospel, the wise men from the East follow the star seeking the "king of the Jews". Herod is threatened and calls the chief priests and elders. He asks them where the Messiah was to be born. They quote this passage. (Matthew 2:5-6). The word Bethlehem means House of Bread, and Jesus is the Bread of Life (John 6:35).

Our second reading was taken from the Letter to the Hebrews. We heard that when Christ (the Greek word for Messiah) came, a body was prepared for Him. He offered Himself as a sacrifice for sin and the New Covenant was sealed in His Blood.

The Church is the New Israel, and the child whose birth we will soon commemorate is the fulfillment of every Messianic promise made to Israel in the Hebrew Scriptures. In and through Jesus Christ, the newborn King, the whole world is invited into the kingdom of God.

The Gospel on this particular Sunday before Christmas, the Nativity of the Lord, follows St. Luke's account of the Annunciation when Gabriel, the Angel, the Messenger of the Lord, visited the Virgin of Nazareth, Mary and says:

"Mary, do not be afraid; you have won God's favor. Look! You are to conceive in your womb and bear a son, and you must name him Jesus. He will be great and will be called Son of the Most- High. The Lord God will give him the throne of his ancestor David; he will rule over the House of Jacob forever and his reign will have no end.'"

Mary's FIAT, her YES, her surrender to the will of God, brought heaven to earth and lifted earth to heaven. At that moment, the Incarnation began. The Second Person of the Blessed Trinity, the Word through whom the whole universe was fashioned, became a human person, a child in the womb of Mary. Mary became the Ark of the New Covenant - the one whom the early Called fathers called "the Second Eve", the Mother of the New Creation, the Mother of the Lord Jesus Christ.

Mary, in her selflessness, was open to the angel's visit and believed the message the Lord spoke through him. She recognized who was speaking. She listened, received, and responded with her YES! Be it done unto me according to your word.

In so doing, she also demonstrated the framework for all authentic Christian spirituality. God initiates a relationship with us through His Son Jesus and we are invited to respond in our own personal surrender to Him. By saying "Yes", through our own Fiat, we are set apart...consecrated... made holy. We also become servants of the Lord.

The account we heard on this 4th Sunday of Advent, the last Sunday before Christmas, was of Mary's visit to her kinswoman, Elizabeth. Mary was the first evangelizer and the first disciple of her Son, Jesus. She gave the first Gospel testimony to her cousin, Elizabeth, without words, as the Redeemer in her womb drew the child in Elizabeth's womb, John the Baptizer, to Himself. He did so from Mary's womb.

Jesus, Love Incarnate, drew John from the very first home of the whole human race, a mother's womb, into his unique mission in the plan of salvation. At the beginning of that missionary encounter, Elizabeth greeted Mary with profound humility, saying "who am I that the mother of my Lord should come to me?"

Then the son in her own womb became the first convert "in utero" as he leapt in praise of the One through whom the universe was created, taken residence in Mary's womb, a living tabernacle. John the Baptizer, the last Prophet of Old Testament and first of the New, was prepared in a womb, and drawn by this amazing grace, without a word being spoken, through Mary's witness of surrendered love.

This event, traditionally called "The Visitation," recorded in the Gospel of St. Luke (Luke l: 39-45), is meant to continue in our lives as we carry Jesus forward in time.

Mary understood the work of the Holy Spirit unlike anyone in history. She had been clothed in that wonderful gift when she was first visited by the angel and "overshadowed." It empowered her to live her whole life in complete surrender to God's will and to thereby prefigure the mission of the entire Christian community, the Church, throughout history. She was the first disciple.

May the Lord bless you, your families, the Church, and the Nations of the world on this 4th Sunday of Advent. Soon we will celebrate the birth, the Nativity of the Lord. Have a blessed Lords Day..