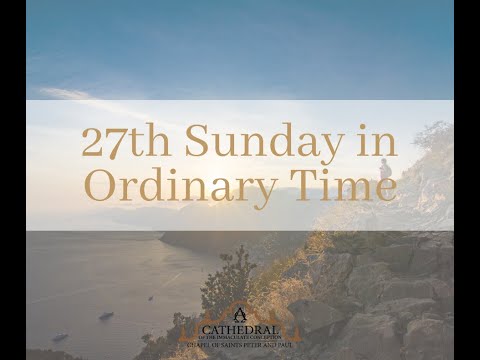 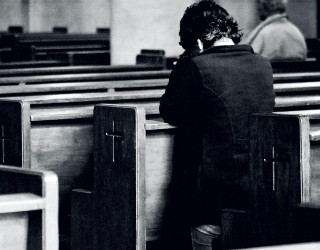 I AM HAPPY TO OFFER EACH OF YOU AN INVITATION TO SUNDAY MASS ON THE 27th Sunday in Ordinary Time in the Catholic Diocese of Tyler.  Our participation at Holy Mass is always enhanced when we take time to prayerfully reflect on the readings.

This is one of the reasons we are encouraged to read the readings for Holy Mass before we come to assist at Holy Mass.

In our first reading on this 27th Sunday in Ordinary time we heard a portion of the second creation account, found in the second chapter of the Book of Genesis. It is such a powerful and important reading. The Lord fashioned Eve out of Adam.

To reflect the Image of the Trinitarian God, we must be in relationship.

Thus, the Lord made us male and female. That difference is a GIFT and makes it possible for us to enter a relationship of love and self-gift, in Marriage.

In the Gospel appointed for todays Mass, Jesus, the One through whom the whole Universe was made, refers to this passage in affirming the indissolubility of marriage and the undeniable truth that we were created male and female.

In June of 2019, the Congregation for Catholic Education of the Vatican issued, "Male and Female He Created Them: Towards a Path of Dialogue on the Question of Gender Theory in Education." In this document, the Congregation sought to engage a growing trend in educational institutions to reject the gift of sexual difference. Its introductory paragraph frames the entire document:

"It is becoming increasingly clear that we are now facing with what might accurately be called an educational crisis, especially in the field of affectivity and sexuality. In many places, curricula are being planned and implemented which "allegedly convey a neutral conception of the person and of life, yet in fact reflect an anthropology opposed to faith and to right reason".(citing Pope Benedict XVI in 2011)

"The disorientation regarding anthropology which is a widespread feature of our cultural landscape has undoubtedly helped to destabilize the family as an institution, bringing with it a tendency to cancel out the differences between men and women, presenting them instead as merely the product of historical and cultural conditioning."

This document reaffirmed what the unbroken teaching of the Bible, the Christian Tradition, the Natural Law, biology, medical science, and the Magisterium of the Catholic Church have all affirmed concerning what is now called "gender ideology".

In short, that "gender ideology" is a complete rejection of God's loving plan in creating us "male and female". It posits a false and indefensible new anthropology. In paragraph 31 of this Vatican document, we read these words:

"Christian anthropology has its roots in the narrative of human origins that appears in the Book of Genesis, where we read that "God created man in his own image [...] male and female he created them." (Gen. 1,27) These words capture not only the essence of the story of creation but also that of the life-giving relationship between men and women, which brings them into intimate union with God. The self is completed by the one who is other than the self, according to the specific identity of each person, and both have a point of encounter forming a dynamic of reciprocity which is derived from and sustained by the Creator."

On this Lord's Day, let us hear His word and follow it. God's design is a loving plan which leads to human flourishing and true happiness. Sexual difference is a gift. Marriage between one man and one woman is a gift.