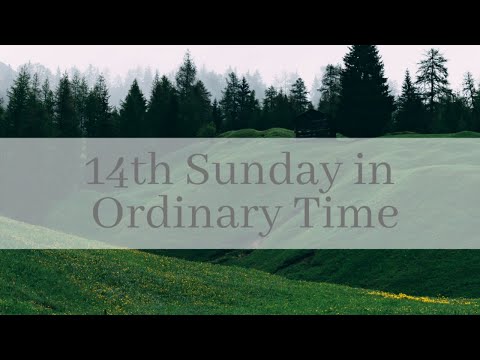 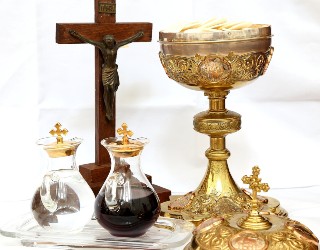 Image by James Chan from Pixabay

I AM HAPPY TO OFFER EACH OF YOU AN INVITATION TO SUNDAY MASS ON THE FOURTEENTH SUNDAY in OORDINARY TIME in the Catholic Diocese of Tyler. The response to offering these liturgies online has been overwhelming. The readings, as always, offer so much for us to reflect on. It is helpful to pray through them and reflect upon them before we assist at Holy Mass.

In our first reading the Lord calls the great Hebrew prophet Ezekiel to speak to His people to "the sons of Israel", "to a Nation of rebels". The role of Prophets, in both the Hebrew Scriptures (what Christians call the Old Testament) and the New Testament, as well as throughout the history of the Church, is usually difficult. The Lord raises them up and then sends His word to His people - to them and through them. They, the messengers, are usually subject to persecution, resistance, and suffering.

The Lord also tells Ezekiel "Be not afraid of them or their words"... Ezekiel engaged in his prophetic ministry during the Babylonian exile. He would prophesy the fall of Jerusalem and the destruction of Solomons Temple. This was a consequence of the sin of Israel. And Israel did not want to hear the message.  But he also prophesied the restoration of Israel. He, like all the Lord's prophets, called Israel, and, in the New Testament and Church history, the Church (which is the New Israel) called the people to repent. To turn away from sin and rebellion and turn back to the Lord.

Are we listening to the prophets of this hour? Are we aware of the messages of our Lady in her various appearances? Are we reading and listening to prophetic voices, such as Pope St John Paul II, and others? Are living lives of repentance and seeking to turn more and more toward the Lord? We live in an age where there is a great falling away from God, even within the Church, the Mystical Body of Jesus Christ. Like the Psalm response we heard today are "Our eyes fixed on the Lord, pleading for His Mercy?

In our second reading, we hear more from the Second letter of the Apostle Paul to the Corinthians. His challenges in Corinth are an example of what often happens when the Lord raises up prophetic leadership within the Church. The kind of leadership demonstrated by the Apostle Paul. His was, and still is, a prophetic voice to the Church. in the passage we heard today, he also speaks of the "thorn in the flesh". Some Church fathers thought it was a physical ailment. Others, the tribulations he faces, and the oppositions, from right within the Church.

But even though he begged the Lord to take it from Him, that did not happen. In fact, as the Apostle recounts, the response He heard from the Lord is "My power is perfected in your weakness" The Lord in His infinite mercy and love has made our own weakness and frailties become the path to a deepening relationship with Him. They are the door to our own progress in our baptismal call to holiness. This process of being emptied of self and filled with His life happens by grace. However, that wonderful free gift invites our continual response, our cooperation, with His loving plan.

St. Francis De Sales (1567-1610) was a great pastor of souls. He once wrote in a letter to one of the many who sought his holy counsel "God wants your misery to be the throne of His mercy. He desires that your powerlessness be the seat of His omnipotence." Let us reflect on our own "weaknesses" and ask the Lord to use them to reveal His strength.

In our Gospel text for today's Holy Mass, taken from the sixth chapter of St Mark, we see the greatest example of a rejection of a Prophet. The Very Son of God, the promised Messiah, the Incarnate Word of God, was rejected in his own hometown. "They took offense at Him".

In the ordinariness of His Sacred Humanity, He was simply too much for them. They took offense at God Incarnate! After all, he was the son of a carpenter, and his extended family lived in the neighborhood! How could He preach this kind of message of repentance? How could he work miracles? Other Gospel accounts communicate this same kind of spiritual blindness evidenced in those who should have welcomed Him. Mark writes that many of his neighbors took him for a madman! (Mk. 3:21)

So, it is with those who bear His name - Christians - if we truly seek to walk in His ways, to participate in His ongoing redemptive mission, to be faithful to His continued work, through His Body, the Church, of which we are members. They will - they do - take offense at us!  Are we ready for that? Are we willing to stand with Jesus Christ in this hour when a new paganism, masquerading as a "progressive" world view, is denying God, and rejecting His ways?

And, to all our readers, students, friends and supporters in the United States of America, Happy Independence Day. Always remembers, our dependence on the Lord ensures our independence from sin and all forms of tyranny.

May the Lord Jesus Christ be the center of your life and the heart of your home. Have a wonderful Lords Day.