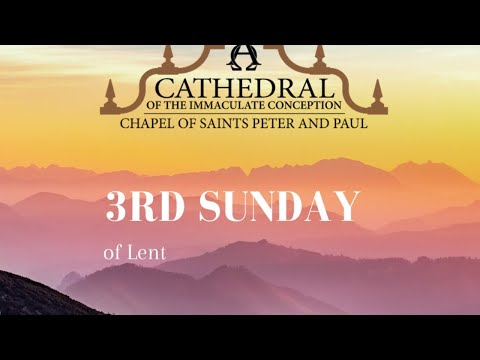 I AM HAPPY TO OFFER EACH OF YOU AN INVITATION TO SUNDAY MASS ON THE THIRD SUNDAY OF LENT in the Catholic Diocese of Tyler. The response to offering these liturgies online has been overwhelming. The readings, as always, offer so much for us to reflect on. It is helpful to pray through them and reflect upon them before we assist at Holy Mass.

In the first reading for today's Holy Mass on this Third Sunday of Lent, we heard the Ten Commandments, given by the Lord to Moses for the people of Israel. They should be familiar to every one of us. They set forth a Way of Life which reflects Gods plan - not only for Israel, but through Israel, for all Nations. They set forth how we are to worship and obey God, not kill, not steal, honor, and keep holy the Lords Day, honor one another, honor our parents...

Sometimes, people mistakenly believe that these ten commandments are no longer as important. Nothing could be farther from the truth. In fact, especially during Lent, they provide a particularly good framework for examining our own Conscience. Especially when we are preparing to go to confession. Are we following these commandments? Jesus came not to abolish them, but to fulfill them - and through His Passion Suffering, Death and Resurrection give us the grace we need to live them, in Him.

How are we doing?

In our second reading, an excerpt from St Paul's second letter to the Corinthians, St Paul is addressing dissension in the Church at Corinth. Factions had developed, with an inappropriate emphasis being placed on the personality of some leaders. The divisions were also growing between Jewish and Gentile believers. That was not and is not the Lords plan, then or now.   St Paul calls the Corinthians to refocus on the centrality of Jesus Christ. This is the core of his entire ministry. A former Jewish Rabbi who had persecuted the early Christians before his own encounter with the Risen Lord on his way to Damascus, Paul became the Apostle to the Gentiles.

Such divisions are a real obstacle to the unity which the Lord Jesus restored through His saving death and resurrection. In our own day, we also see this kind of factionalism growing in many ways. Remember, it is sin which separates. Grace liberates. Living faith integrates.

The division between Christians was never the Lords plan. Jesus prayed, in His High Priestly Prayer "Father, may they be one in us...so that the world may believe you sent me..." (John 17: 21ff)

Are we fostering unity in the Church? Or are we feeding division?

In the Gospel appointed for today's Holy Mass, Jesus cleanses the temple. He overturns the money changers tables. He calls those within the temple to offer pure worship to God. He demands that they stop using "His Father's House" as a marketplace.

Think about this. The Incarnate Word of the Father, the promised Messiah, is standing before them! Yet, they are so blinded by their own self worship and arrogance of power that they fail to recognize Him. WE heard these words proclaimed:

"The Jews intervened and said, 'What sign can you show us that you should act like this?' Jesus answered, 'Destroy this Temple, and in three days I will raise it up.' The Jews replied, 'It has taken forty-six years to build this Temple: are you going to raise it up again in three days?' But he was speaking of the Temple that was his body, and when Jesus rose from the dead, his disciples remembered that he had said this, and they believed the scripture and what he had said."

How do we treat the "temple"? For Christians that is the sanctuary of the Church. Jesus is present in a profound way in every Catholic Church, particularly in the tabernacle. When we approach Him there, do we recognize Him? Do we show Him honor? Do we worship Him? Let us resolve this Lent to rediscover our love for the Fathers House and pledge to regularly visit the Lord in the tabernacle whenever possible.

May the Lord bless you, your families, the Church, and the Nations of the world on this Lord's Day and throughout this pilgrimage of faith called Lent.