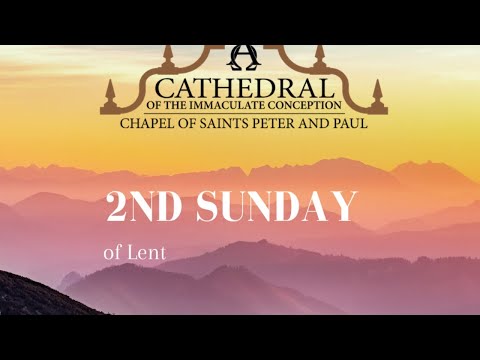 I AM HAPPY TO OFFER EACH OF YOU AN INVITATION TO SUNDAY MASS ON THE SECOND SUNDAY OF LENT in the Catholic Diocese of Tyler. The response to offering these liturgies online has been overwhelming. The readings, as always, offer so much for us to reflect on. It is helpful to pray through them and reflect upon them before we assist at Holy Mass.

Our first reading for today's Mass is not only an important historical account in Salvation history, it is rich with allegorical meaning and was the favorite of many writings of reflection in the Christian Tradition. It is the familiar story of the faith of Abraham and the test which he endured, and which he passed. That test showed the depth of the faith of this man called our father in faith in the Canon of the Holy Mass.  He knew what the Lord had promised in giving Isaac to he and Sarah so late in life, but more importantly, He put His faith in the Lord of the promise.

Centuries later, God would send His Own Son, Jesus, who would carry the wood for the sacrifice up another mountain and, willingly become the very Lamb of sacrifice - obtaining salvation for all who place their faith in Him.

"The Letter to the Hebrews, in its great eulogy of the faith of Israel's ancestors, lays special emphasis on Abraham's faith: "By faith, Abraham obeyed when he was called to go out to a place which he was to receive as an inheritance; and he went out, not knowing where he was to go." By faith, he lived as a stranger and pilgrim in the promised land. By faith, Sarah was given to conceive the son of the promise. And by faith Abraham offered his only son in sacrifice. Abraham thus fulfills the definition of faith in Hebrews 11:1: "Faith is the assurance of things hoped for, the conviction of things not seen": "Abraham believed God, and it was reckoned to him as righteousness."8 Because he was "strong in his faith", Abraham became the "father of all who believe".

In our second reading, the end of chapter eight of St Paul's letter to the Romans, the Apostle reminds us that God is FOR US. He held nothing back. He gave us His only Son Jesus Christ as our Savior! Do you believe that God is for you? Do you call on Him in times of trouble? Do you believe what the Apostle wrote in the first verses of this eighth chapter of his letter to the Romans?

"There is therefore now no condemnation for those who are in Christ Jesus. For the law of the Spirit of life in Christ Jesus has set me free from the law of sin and death. For God has done what the law, weakened by the flesh, could not do: sending his own Son in the likeness of sinful flesh and for sin, he condemned sin in the flesh, in order that the just requirement of the law might be fulfilled in us, who walk not according to the flesh but according to the Spirit." (Romans 8:1-4)

We have been set free from the law of sin and death. Set free for Life in Jesus Christ. For a whole new way of living!

The Gospel for today's Holy Mass is St Marks account of the Transfiguration of the Lord. From the earliest centuries, the Church emphasized the centrality of the Transfiguration of the Lord in the Paschal Mystery and the whole plan of God. It prepared the Apostles for their mission by giving them a glimpse of the glory of God as it was fully revealed in Jesus Christ, strengthening them for the suffering and Passion the Lord was soon to go through.

But it was also to reveal for them the ultimate goal of the Christian life and the plan of God for the whole human race, if we turn away from sin and follow the path of holiness in Jesus Christ.

The Transfiguration of Jesus Christ is also meant to remind us that our experience of our life in the Lord now is only the beginning of what is to come in the kingdom. We shall also be transfigured in Resurrected bodies. The fullness of redemption means that the whole person, Body, Soul and Spirit, will be saved and transfigured.

However, though not in its fullness yet, our current life can be a participation in that new reality. We are being transfigured as we cooperate with grace, living in the heart of the Church and experiencing the sacramental life. The Church, in the words of the Fathers of the Second Vatican Council, is a "seed of the kingdom" to come. Our life within the Church is a participation in the eternal realities of the life to come in a new heaven and a new earth.

Yes, the Transfiguration was meant to strengthen the disciples for the coming Passion. But it was also meant to help them enter more deeply into the fullness of redemption in Jesus Christ. And the meaning of the Christian life. We too will be transfigured. In fact, the process has already begun. Our Lenten penance and sacrifice is to strengthen us and empower us to become more and more like Jesus Christ.

May the Lord bless you, your families, the Church, and the Nations of the world on this Lord's Day and throughout this pilgrimage of faith called Lent.